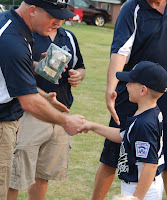 It is tradition for hockey programs to give participation trophies at the end of the season for, well, participating. Unfortunately, what does participating really mean? In this post Brad Jubin, youth sport coach from Atlanta and co-founder of APIVEO, explains the issues with mindlessly handing out trophies.

I would like to begin by saying that I am not in favor of “participation” trophies for youth athletes. The reason is not that we are giving out trophies to every player; instead, it’s the lack of creativity in what we call them and the meaning behind them. After coaching dozens of youth teams, I know that an eight- year-old player who came to practice, worked hard, played in the games and cheered on his/her teammates is not excited to be recognized as a “participant.” As parents and coaches, we have to be able to come up with something more meaningful than “participant.”

Kids love getting trophies and adults love handing them out. Trophies are a good thing. However, there is something missing here: the sense of accomplishment. Think back to the beginning of the season when the coach made the statement: “it’s not all about winning and losing; it’s about having fun.” I would like to take that a step further. While I agree it’s not all about winning and losing, I also think it’s about a lot more than just having fun. That’s why I set an achievable goal at the beginning of the season, continue to emphasize it during the season and then reward it at the end of the season. The goal I set for every team I coach is simple: Always Play 4 Each Other! I spend the season teaching, coaching, reinforcing and modeling leadership through service so that each player understands that they have a unique opportunity to help our team. This idea is not a subtle concept; leadership through service is an intentional effort and that is exactly the way I teach it.

When our season ends each player receives a trophy with the inscription “Always Play 4 Each Other”. Each player is recognized for his/her service and his/her leadership throughout the season. I make a big deal about what great leaders they all are and how they can continue to lead through service at home, in their school and their community. By using this approach we are not only celebrating their developing leadership, but are inspiring them to continue to be great leaders.  I have never handed out a trophy that wasn’t earned and appreciated.

I suggest that parents and coaches decide at the beginning of the season if they will hand out trophies rather than the last minute emails at the end of the season. In this way team goals can be established, reinforced and rewarded. These goals help ensure that it’s not “all about winning and losing”.
I will never forget our baseball celebration a few years ago. We had a BBQ along with our “Always Play 4 Each Other” trophy ceremony. The kids and their parents had a great time, and there was a true feeling of friendship and achievement. During the celebration one of our coaches looked at me and said, “This is the happiest 2 and 12 team I’ve ever seen.” I smiled and said, “Really, we were 2 and 12?”

Set a goal, make a plan, execute it and give the kids a trophy that is meaningful!

Learn more about Brad Jubin and APIVEO's message of "Always Play 4 Each Other", and practical ways to inspire your athletes to lead at http://www.apiveo.com/
Posted by Doctor Larry at 9:29 AM